The main interests of our lab are the cell biology and biochemistry of single-celled protozoan parasites, primarily Giardia lamblia and Toxoplasma gondii. We study mechanisms and structures involved in host-parasite interactions or relevant for transmission to a new host. The former are shaped by long histories of co-evolution of two organisms, which take place in clearly delineated settings. Pathogenic protozoa are single cells that interact with complex multicellular organisms on a local and systemic level. They are fascinating model systems and provide virtually unlimited opportunities for experimental investigation of fundamental cell biology in the context of evolution. The field of evolutionary cell biology is inspired by two central questions which are "How do cells work and interact?" and "How is the diversity of cellular structures and pathways shaped?". The former pertains primarily to the field of cell biology and biochemistry, while the latter relates to the realm of evolutionary biology. Both questions are key to the investigation of the origins of complex life. Hence, cell and evolutionary biology are inherently connected. However, even though opportunities in terms of model systems are not lacking there is still little exchange between these fields.

Giardia stage differentiation and formation of a protective biopolymer

A particular interest of the lab is the cell biology of stage-differentiation of the Giardia trophozoite to the environmentally resistant and infectious cyst form. We investigate mechanisms of gene regulation, protein trafficking, organelle genesis and maturation, lipid biosynthesis and formation of the cyst wall. Because Giardia has undergone massive reductive evolution but also presents evidence for lateral gene transfer this is a particularly interesting environment to study basic questions in a highly simplified cellular context. For example, we recently established a detailed model for the neogenesis and maturation of Golgi–like cisternae, which contain the components for the cyst wall. Furthermore, we have engineered the first and currently only gene knock-out line for one of the cyst wall proteins.

How do protein coat complexes contribute to neogenesis of Golgi-like maturation compartments in encysting Giardia cells? Why isn’t giardial clathrin involved in dynamic generation of membrane vesicles, but used as a highly stabilized scaffold for large endocytic organelles? What are the minimal requirements for protein import into mitochondrial relic organelles of Giardia? We combine molecular biology, biochemistry, imaging and bioinformatics to address these questions. Because our model organisms are highly diverged, we custom build tools and adapt new techniques for experimental work. In addition, our lab is involved directly in developing web portals such as GiardiaDB. All of these efforts provide wet-lab and bioinformatics resources for the community to help overcome the technical challenges of research outside mainstream cell biology.

Toxoplasma, Eimeria and the biology of the coccidian cycle

Toxoplasma gondii is an important cause for abortions in sheep and a zoonotic pathogen which chronically infects one third of the human population. Toxoplasma biology and host-parasite interaction in intermediate hosts has been studied extensively for more than two decades. Conversely, the complex sexual cycle is strictly confined to cat enterocytes and has remained inaccessible to all but the most cursory investigations in experimentally infected animals. We have generated the first comprehensive gene expression database with the aim to unlock the molecular basis for sexual development of the parasite at different stages during experimental infections in cats. With this novel knowledge base we now initiate a concerted effort to make Toxoplasma enteroepithelial development accessible to investigation in vitro. Similar studies are currently under way with Eimeria tenella, Babesia canis, and Besnoitia besnoitii.

The Laboratory for Molecular Parasitology is at the Institute of Parasitology based at the Vetsuisse Faculty of the University of Zürich and is affiliated with the Life Sciences Zürich Graduate School. 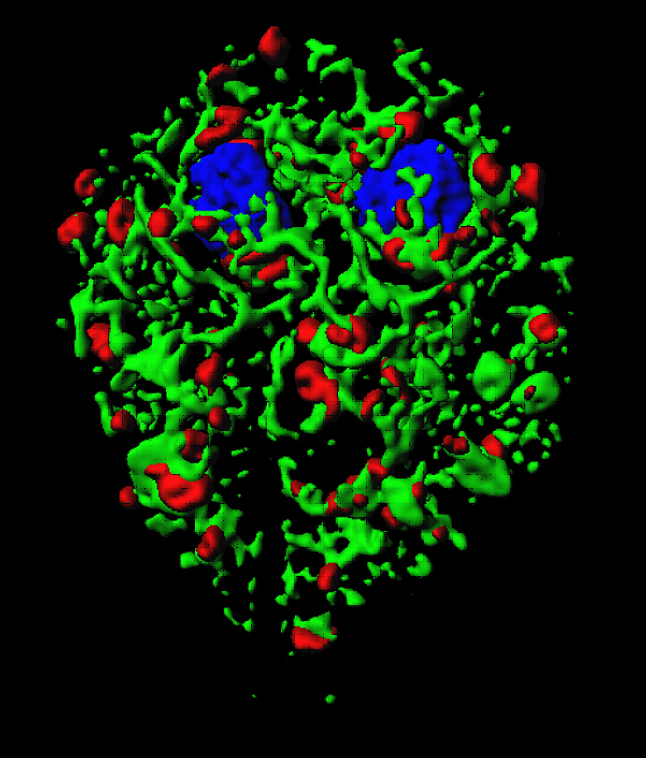 Three dimensional surface model of the giardial endoplasmic reticulum (green) and Golgi-like compartments containing cyst wall protein (red) in a trophozoite that undergoes encystation. The model was calculated from 42 optical sections made with a confocal laser scanning microscope.