Echinococcus spp. are transmitted to intermediate hosts and also to humans through the ingestion of viable eggs released to the environment in the canid (mainly fox and dog) faeces. Echinococcus multilocularis causes alveolar echinococcosis (AE), E. granulosus is responsible for cystic echinococcosis (CE), both zoonoses with high burdens of diseases. While E. granulosus has a worldwide distribution, E. multilocularis is restricted to the Northern Hemisphere and is endemic in Switzerland. Recently, the incidence of AE has risen in Switzerland probably due to an increased infection pressure. Reasons for this emergency are the increase in fox population and their presence in urban areas, the urbanization of the parasite cycle, and also infected dogs could play an important role as a source of infection.

Eggs of E. multilocularis and other taeniids can contaminate the environment and food sources facilitating the transmission to humans. However, the exact mechanisms by which humans acquire the infection remain unknown. Taeniid eggs are indistinguishable from each other at the microscopic examination. Therefore, the determination of species in a given sample must include a molecular test with specific amplification of the parasitic DNA.

Recent investigations performed at our Institute demonstrated the presence of taeniid eggs in vegetables used to feed primates at the Basel zoo. Some of the vegetables used in this study were purchased from local farmers in the Basel region while others came from different southern European countries. Although E. multilocularis was not found in the vegetables studied, other taeniid parasites that use canids as definite hosts were identified, suggesting that some of the vegetables have been in contact with canid faeces (Federer et al. 2016, Int J Parasitol Parasites Wildl.). Although the scientific literature provides some evidence of the presence of taeniid eggs in vegetables used for human consumption in different countries, to date there is no standardized methodology to isolate taeniid eggs from vegetables (see Alvarez Rojas et al. 2018, Curr Clin Micro Rpt). This matter has been set as a priority for the European Food and Safety Agency (EFSA) aiming to identify key points in which food sources can be involved in the transmission of taeniid parasites to humans. 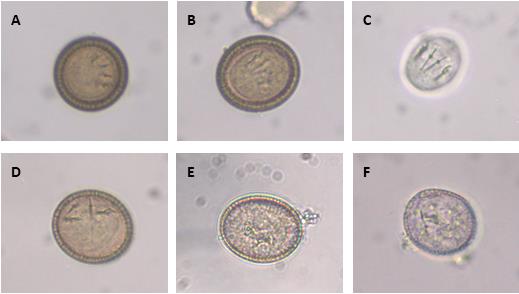 All eggs in this figure were isolated from Echinococcus multilocularis and illustrate the typical features of a taeniid egg. A and B showing mature eggs with a thick embryophore, clearly visible oncosphere and pairs of hooks in parallel alignment; these microscopic features suggest these are viable eggs. C Oncosphere released from a viable egg after treatment with 2% sodium hypochlorite for 2 min. D Non-viable egg stored for 2 years at 4 °C in physiological saline solution showing unparalleled hooks. E and F Immature eggs showing a thin embryophore and no oncosphere; E was stored for 8 months in saline solution at 4 °C and F was freshly removed from an adult specimen of E. multilocularis infecting a fox. From Alvarez Rojas et al, 2018.